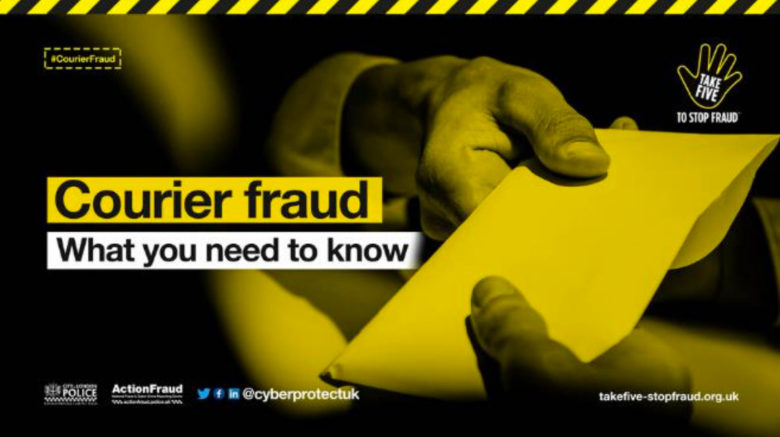 This January all police forces are working together on a national campaign to target criminals committing courier fraud, a crime which has become much more common over the last year. We’re doing all we can to put a stop to it, but we need your help. This page tells you what courier fraud is, and what you can do to help us stop it.

What is courier fraud?

There are common elements to each case of courier fraud.

In these circumstances, either the number offered will not be genuine, or where a genuine number is suggested, the fraudster will stay on the line and pass the victim to an accomplice.

After some trust has been established, the fraudster will then, for example, suggest:

Victims are asked to co-operate in the investigation by going to their bank and withdrawing money or purchasing an expensive item to hand over.

A ‘courier’ is either sent to their home to collect the money, bank card or goods, or the victim is asked to meet the courier somewhere.

The victim is often given a code word, again to convince them this is all legitimate.

In the space of just a few hours, the victim will have handed over a significant amount of money or their bank card, which it is unlikely they’ll see again.

Bill’s story: “I thought I was wise to scams.

Bill,73, lives on his own in Cranleigh, Surrey. He has a good family unit, is fit and well and enjoys the company of his dog.

In September, Bill received a call on his landline from a man saying he was a police officer from the Hammersmith Police Station fraud squad. The man told Bill an elaborate story about money laundering taking place in the Cranleigh and Guildford areas. The caller claimed Bill had not yet been a victim but that his help was needed to catch the suspects, who were supposedly bank employees.

“He was very convincing and provided a phone number to check his authenticity.”

Bill was keen to assist the police, and agreed to go to his local Cranleigh bank branch and withdraw £4520.

Bill set off to the bank, all the while with the fraudster connected on his mobile phone to collect evidence.

He found the Cranleigh branch to be closed, but the fraudster persuaded Bill to drive to the Godalming branch instead, as it was important to obtain evidence that day.

When he arrived at the Godalming branch, he was only able to withdraw £2000, as they were low on cash, but he returned home with this, and as instructed put it in an envelope. The fraudster told Bill that his money was needed as evidence so arrests could be made.

A courier then arrived, gave Bill a pre-agreed code, and took the money. The fraudster told Bill that he now needed to go to the Guildford branch to withdraw the remaining £2520.

When Bill arrived outside the Guildford branch, he called them back on the number they’d given him for Hammersmith police station, the number was dead and Bill realised he’d been scammed.

Bill lost £2000. He had never received this sort of call before.

He told Surrey Police officers he thought he was wise to scams and would never fall for one, but had been taken in as the caller sounded so convincing. He is veryannoyed with himself for being the victim of the scam.

A close call in Sussex

An 83-year-old man from Pease Pottage, came close to being a victim of courier fraud in November when a conman called his home phone purporting to be from Essex Police.

He was told by the fraudster there had been improper activity on his bank account which he suspected was part of a money laundering scheme. The victim was asked to withdraw £5,000 to see if the bank notes were fraudulent, which he duly did, wanting to assist an investigation.

Once he returned from the bank he was asked to read the bank note numbers to the fraudster and was told that they were definitely a cause for concern and the money would have to be collected by an officer and taken to Essex Police station.

Later a young man, not dressed in a police uniform, then arrived at the front door asking to collect the cash, at which point the victim refused and thankfully shut the door and called the police on a separate phone line, worried that all was not as it seemed.

The victim said: “The conman on the phone was very well-spoken and convincing – but that, of course, is his job! All the way through this process I was adamant I wasn’tgoing to give him any money, but I wanted to help so I went along with it. I was surprised I didn’t spot something earlier in the conversation, he even gave me a crime reference number.

“I did feel a bit shaky afterwards thinking that it was such a close call. I felt annoyed I’d been talking to this so-called DC Wheeler from Essex police who even gave me so many false details. I feelsorry for older folk, and there’s not much older than me, but I worry that older people may easily hand over the money.

“Sending someone not dressed in a police uniform was the weakest link in their game, which made me think twice.

“The PCSO was very helpful, he drove me to and from the bank to return the money and left me feeling safe. He offered lots of advice and told me things I should do to protect myself and even phoned a month afterwards to make sure I’d done them all.”

Be a good friend and neighbour

Sadly courier fraudsters hone in on people who live alone, are elderly or are vulnerable in some other way.

You can do your bit to prevent courier fraud by checking on elderly friends, relatives and neighbours, and making sure they know our golden rules.

The police and your bank will never:

“We know that many people who have been taken in by fraudsters blame themselves and don’t report it to us.

“Our message to them is that it isn’t your fault and please do report it. Our officers will be sympathetic and understanding, and we can advise about measures to ensure you do not become a repeat victim. Reporting also really helps us build up a picture of the people perpetrating this crime and gives us a greater chance of catching them. Belowis a cut out and keep reminder that you can print and give to friends and relativesto keep by their phone as a reminder.”