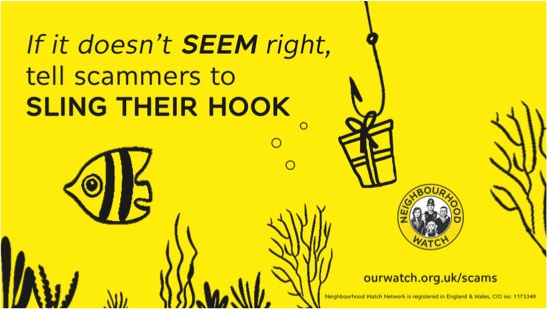 Hastings Neighbourhood Watch is trying to cut down on fraud by promoting a warning that explains the psychology around why people fall victim to scams.

The national ‘sling your hook’ campaign is based on a national study of the top-five tactics used by scammers and is designed to help people protect themselves against the huge number that happen every day.

John Bownas, chair of Hastings Neighbourhood Watch, said: “We know that victims of scams often report that in hindsight they felt something wasn’t quite right at the time. That’s why we’re raising awareness of the tactics scammers use, and encouraging people to ‘stop and think’. If something doesn’t feel, seem, look or sound right, it’s probably time to trust your gut instinct and let it prevent you from becoming a scam victim.”

The study has identified the most common ways that scammers hook their prey in, and, by knowing what these are, people can stay one step ahead of the criminals.

John explained what the warning signs are to look out for: “If you are contacted out of the blue by someone who tries just a bit too hard to be friendly that’s probably the first time to be cautious – especially if they imply they’re trying to do you a favour. If you miss those warning signs look out for a request to do something seemingly minor and unimportant – because that can soon lead to requests to do more. And if when you say ‘no’ you’re told that everyone else is doing what you are being asked and that this is your last chance to act now it’s almost certainly time to end the conversation.”

The campaign advises everyone to do everything they can to maintain their guard against cold calls, e-mails, SMS messages and any other form of unsolicited contact. The message being promoted is to CHALLENGE anything that seems fake or suspicious, STOP and take a moment before parting with any money, and REPORT anything that feels like you may have fallen victim – both to your bank and to the police, via ‘Action Fraud’.

John Hayward-Cripps, CEO of Neighbourhood Watch Network, said: “Any of us can be caught out by scammers. If you sense something’s not quite right, give a clear, firm “no”. Politeness and fear of offence can make us more vulnerable – so we want to tell people it’s ok to be firm in telling scammers you are not interested.

Almost 500,000 consumer fraud cases were recorded in the UK over the last year, with a reported loss of £2.5 billion. Scammers are becoming more sophisticated and using a wide range of platforms, so more and more people are being caught out, especially via online shopping, personal banking, and investment fraud scams.

As lockdown eases, ticket and holiday fraud are now particularly prevalent. Another recent scam sees victims contacted via email and/or text after receiving the Covid-19 vaccine and being asked to take a fake post-vaccine survey with the promise of a cash prize. There’s also been a significant increase in delivery company branded ‘smishing’ (SMS fraud), with scammers asking customers to click a link to reschedule deliveries or pay incomplete shipping charges.